Throughout history, babies have been fed by people other than those who gave birth to them. In some cases, a wet nurse was used. But in others, induced lactation was used so that a baby and caregiver could enjoy the benefits of breastfeeding.

Here we have compiled all you need to know about induced lactation: who can do it, how it’s done, and what your chances of success are.

Can I Induce Lactation?

You do not have to give birth in order to breastfeed your baby. Induced lactation/adoptive breastfeeding is where a caregiver who has not physically been pregnant and carried the baby themselves breastfeeds their baby.

What Is Induced Lactation/Adoptive Breastfeeding?

Induced lactation/adoptive breastfeeding is where a caregiver who has not physically been pregnant and carried the baby themselves breastfeeds their baby.

This can happen when someone adopts a baby, has a baby with a surrogate, is the partner of someone who has been pregnant, or becomes a parent in any other way.

Can You Induce Lactation Without Being Pregnant?

Yes, it is possible to induce lactation without being pregnant.

The hormone responsible for ongoing milk production is prolactin. This is produced by the pituitary gland, which is located at the base of the brain. So, in theory, anyone with a healthy pituitary gland can lactate.

In tandem with the higher prolactin levels in the body, this drop in progesterone and estrogen induces lactation.

When a baby suckles at the breast, or when the breast is stimulated by a pump, the breast sends a signal to the brain. The brain responds by releasing oxytocin which triggers the “let-down reflex” and causes milk to flow.

Once the physical process of breastfeeding, or pumping, begins, milk is produced on a supply and demand basis. The more the breasts are stimulated and drained, and the more prolactin and oxytocin is released, the more milk is produced.

How to Induce Lactation

To induce lactation, you have to recreate the physical processes that occur in the body during pregnancy, childbirth, and the postpartum period.

There are three arms of the process, not all of which are essential.

If you have at least 3 to four months in which to prepare, a doctor can prescribe hormone therapy to mimic the hormone levels of pregnancy. You will take a combination of estrogen and progesterone until roughly six weeks before you plan to begin breastfeeding (1).

This step is helpful but not critical to success.

Recreating the physical process of breastfeeding by using a breast pump causes the body to produce prolactin and oxytocin. The release of these hormones results in lactation.

The best results come from using a hospital-grade breast pump that you can use on both breasts at once. The standard regime is to pump for:

Any milk you produce during this process can be stored and given to your baby at a later date.

A galactagogue is a substance that stimulates or increases lactation. They can be prescription medications, herbal supplements, homeopathic compounds, or other substances.

Galactagogues are not necessary to induce lactation, may not work for everyone, and are only useful when taken in conjunction with an appropriate pumping routine.

How Much Fenugreek Do I Take to Induce Lactation?

Fenugreek is a herb, similar to clover, which some people believe increases lactation. A recent review of scientific studies decided the evidence for the efficacy of Fenugreek was inconclusive (2).

The standard dose is to take 3 x 500mg capsule three times a day — nine pills a day in total.

However, Fenugreek lowers blood sugar, so it is not suitable for people with diabetes. It can also cause nausea and vomiting in the adult and diarrhea in the baby.

The jury is out on most lactation supplements with some studies showing they work and others concluding they do not (3).

The only galactagogue that appears to demonstrate an increase in the reproduction of breastmilk is domperidone. However, it is unclear whether, in these cases, it was the domperidone or other interventions that were responsible.

Will Domperidone Make Me Lactate?

Domperidone is a prescription-only medication that is not licensed for use in the promotion of lactation. It should only be tried after all other interventions have been unsuccessful. The standard dose is one or two 10mgs capsules 3 times a day.

If you consider herbal supplements, make sure you only do so after consultation with your medical professional.

These are the most common induced lactation questions.

I Had a Total Hysterectomy. Can I Breastfeed?

Yes, it is possible to breastfeed after a total hysterectomy. The hormones responsible for lactation are produced by the pituitary gland at the base of the skull. Consequently, a uterus is not a prerequisite for breastfeeding and neither are ovaries.

The breastmilk from induced lactation is comparable to breastmilk produced by someone roughly ten days after giving birth and breastfeeding. This is known as mature milk.

The hormone placental lactogen is excreted by the placenta. Among its other functions, it is responsible for the production of colostrum from around the 16th week of pregnancy.

Once someone gives birth, the expulsion of the placenta results in a drop in placental lactogen levels. This, in turn, causes breasts to stop producing colostrum and transition to mature milk. Because someone who has not given birth does not experience this process, the milk produced is comparable to the “mature milk” produced after colostrum has ceased.

Breastfeeding promotes the close physical and emotional bond between a baby and the person feeding them. Induced lactation can make this a viable reality for parents who have not gone through the physical process of pregnancy and giving birth.

Hormone therapy and lactation stimulants can help, but the important step is to adopt a regime of pumping and stimulation that will simulate breastfeeding and trick your body into believing it is feeding a baby. 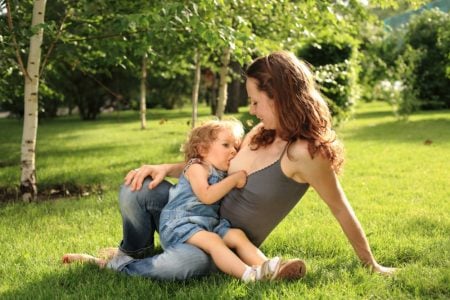 How to Wean a Toddler (6 Steps to Stop Breastfeeding) 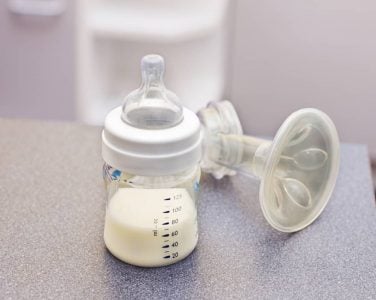 How to Tell if Your Breast Milk Has Gone Bad 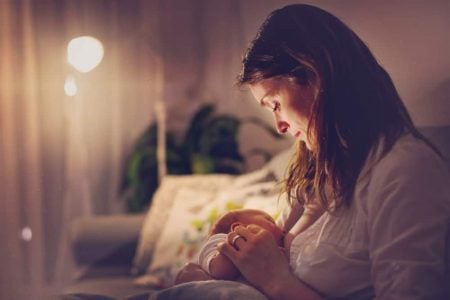 Should You Pump At Night to Maintain Supply? 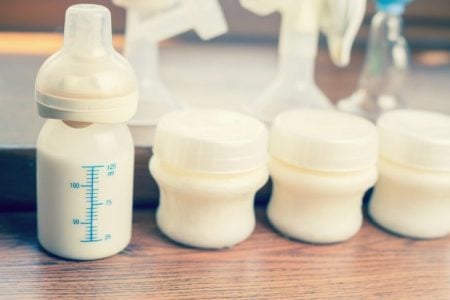 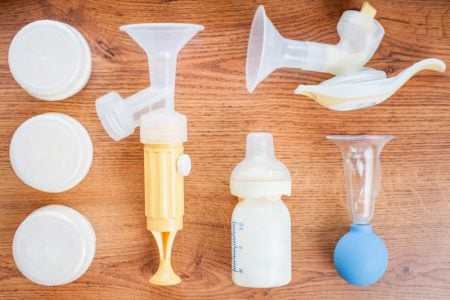 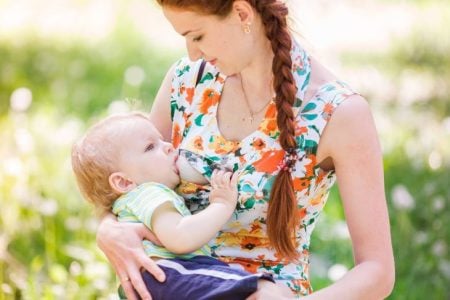 How To Dry Up Your Breast Milk After Weaning