Is your kid addicted to the screen, whether it’s the tablets, computer, or a gaming console?

Are you wondering how much you should be limiting their time in front of electronics and if they’re getting anything out of it?

If you’re wondering about it, you should pat yourself on the back. That means you’re a concerned, involved parent.

Let’s look at the screen time guidelines, negative effects., as well as some ways to manage your kid’s screen time.

The American Academy of Pediatrics (AAP) recommends children between the ages of 2 to 5 have at most one hour of screen time per day (1).

But for babies under the age of 18 months, the recommendations are stricter.

The AAP recommends babies under the age of 18 months should not use any digital media, like tablets, phones, and television (with the exception of video calls).

That’s because it can cause issues such as overstimulation, sleep problems, and a lack of bonding time between baby and parents.

Negative Effects of Screens on Children

While there are upsides to limited screen time, there is a dark side as well, particularly for those who aren’t limited when it comes to how much time is spent on the screens.

With childhood obesity on the rise, part of the blame definitely goes to screen time. Every minute a child sits down for a video game or to play on the tablet, it means they aren’t running around burning off calories.

Too much sitting can not only lead to increased weight, but it is bad for overall longevity as well. Some doctors even refer to sitting as the new smoking — it’s that bad for you. It can lead to Type 2 diabetes, along with other medical conditions.

Screen time can be overstimulating for both children and adults. Using electronics too much can make it harder for a child to fall asleep, stay asleep, and get a good quality of sleep (2). That’s especially true when devices are used right before bedtime.

Screens aren’t great for your child’s vision, when used to excess. Doctors are seeing more dry eye disease, which they are chalking up to screen time. When you use a screen, it can affect how often you blink, which can eventually cause dry eyes.

It can also cause strain from how close the devices are held and the brightness of the screens which can lead to eye strain.

Many educational pursuits take time and effort, such as learning to play a music instrument and solve a complicated math problem. When kids get used to fast-paced games and instant gratification, it can cause them to become frustrated when they have to work hard to achieve things that take more work.

Reading time is important to a child’s education, even before they learn to read themselves. It’s crucial parents read to their children to instill a love of books and help with language development. It leaves far less time for that if a child is engaged with a screen all day.

Most screen time children typically have or want to have, can be pretty fast-paced. That can lead to a lack of concentration, or trouble focusing when things are slower paced. That includes the classroom. And if they can’t concentrate, they run the risk of falling behind on the material that’s being studied.

When too much screen time is allowed, it can cause a child to miss out on those important connections they should be making with other people.

As a family, you won’t spend as much time together. And if they are spending hours with their screens throughout the day, your children won’t have as much time to make solid friendships. Think back to the friendships of your youth, those first real friends you made — those initial friendships are some of the most important relationships many of us will have in our lives.

It can feel like an uphill battle at times to get your child to put down the screen. But the good news is, the sooner you start instilling better habits for this, the easier it will be. It’s much harder to try to implement these rules after your child has already started becoming too attached to its screen time.

Be a Great Example

That’s the thing about being a parent — you need to be aware your child is always watching you. They don’t just listen to our words, they watch our actions and our behaviors. They take cues and form opinions from that.

So make sure you’re engaging with your child instead of constantly answering texts or surfing the web. If you have to check your emails for work, try to do that after your child goes to bed for the night.

Follow the advice of the experts and set time limits on the screen time you let your children have. A good starting point for children 5 and under is one hour a day.

But don’t stop just at limiting time. You should also limit the type of screens they use; There is no reason they should be playing with your phone at all at that age. Educational television can be a healthy part of their day as long as it doesn’t exceed the limit you’ve set for it.

As your kids get older, you will also want to consider limiting the type of content they are able to access on their devices to protect them from inappropriate or dangerous situations.

It’s easy to lose track of time when you’re busy. If you’re not actively logging how much screen time your child is getting, you’re likely underestimating it. To be certain they aren’t exceeding the limit you’ve set up, you need to watch the clock.

You can use the timer on your oven to keep an exact track of time. You can set it for 30 minutes and once that beeper goes off, your child has to stop their screen time. Over time, they’ll know that beep means no more screen time for a while and it will help you avoid any whining or arguments.

You can use your child’s screen time as a way to keep them active. Perhaps you can challenge your child to a game of Wii Sports. There are several interactive sports games, karaoke machines, or dances you can do with your child.

If you’re watching television, you can do simple exercises during the commercials, such as jumping jacks or marching in place. That will get their heart rates going, and although it will only be a few minutes at a time, it’s definitely better than remaining sitting the whole time.

Eat Meals at Your Table

By eating dinner at your family’s table, you won’t be crowded around the television watching it as you eat. That will cut back on your child’s screen time and allow them to interact more with the people around them.

It will also let them pay attention to their body’s cues so they will be able to tell when they are feeling full instead of continuing to eat because they’re more absorbed on the television in front of them.

Don’t Allow Electronics in Their Bedrooms

A child’s bedroom should be a place where they go to sleep, especially at a younger age. Having a screen or two in there will only encourage them to spend more time shut up in their room, away from you and their other family members.

Children shouldn’t have televisions in their rooms, and they shouldn’t be allowed to fall asleep while watching one (3). Children, especially younger ones, don’t need computers in their bedrooms either. They can do their homework on a computer in the living room.

As they get older, making this a firm rule will cut down on the opportunity for your child to be cyberbullied without you knowing about it.

You probably use your computer for work, filing taxes, or keeping in touch with relatives you don’t see anymore. There are dozens of legitimate reasons to keep your computer and internet service going. But televisions are not as essential.

If you’re really dedicated to limiting your child’s screen time, getting rid of your television can help immensely. It’s best to make that move while your child is still little. An infant or a toddler won’t know what they’re missing, but if you try limiting a kindergartner or older school-aged child, you’ll meet with more resistance.

The key to reducing or limiting screen time is consistency — make sure your rules apply all the time, not just when you’re busy and need a screen to keep your child occupied. Along with consistency, you need to realize it will take some effort, especially if your child already has more screen time than recommended.

Dr. Pierrette Mimi Poinsett is a veteran licensed pediatrician with three decades of experience, including 19 years of direct patient clinical care. She currently serves as a medical consultant, where she works with multiple projects and clients in the area of pediatrics, with an emphasis on children and adolescents with special needs.
We won't send you spam. Unsubscribe at any time. 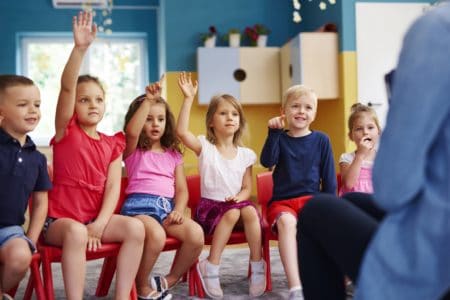 150 Never Have I Ever Questions for Kids (For Every Situation) 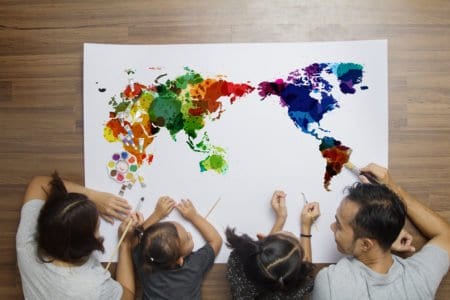 The Best World Maps for Kids (To Help Them Think Global)