Are you thinking about transitioning your baby to a sippy cup? Some babies take easily to the sippy, while others cling to their bottles well past their third birthday.

When my kids were babies, I tried to do everything right. I knew there were health repercussions from bottle-feeding too long, so I wanted to wean my kids appropriately.

They weren’t on board with my plan. No matter how much I cajoled or got “creative” in my parenting, they wanted absolutely nothing to do with cups.

So I did what every mom does. I panicked. Then I educated myself. Before long, my kids were sippy-cup professionals and relinquished their bottles without a fight.

If you’re ready to introduce the sippy to your kids, I’m glad to help! Here’s what you need to know to transition without tears.

When To Introduce A Sippy Cup

It’s a good idea to introduce a sippy cup of water (with the spout removed for easy drinking) when you introduce solid foods. At this age, your baby will not drink anything, but instead become familiar with the sippy, and start to associate it positively with meal times.

Introducing, but not forcing the sippy cup early can make your transition easier. After age one, babies can develop habits. Past age two, they start to develop strong opinions. For this reason, it’s recommended to drop the bottle completely by your child’s first birthday (1).

If you wait longer, your child can develop a difficult-to-break attachment to their bottle. The transition will likely be much easier if you wean from bottles around age one.

However, if you’re parenting an older baby and still haven’t started with a sippy, don’t worry, we’ve got some tips and tricks for you.

How to Transition from Bottle to Sippy Cup

Sometimes it takes trial and error to get results. To increase your chance of transitioning without tears, try the following:

Introduce your child to a sippy cup with solid foods. Occasionally during their feeding, tip the spout of the cup to their mouth so they learn what it’s for.

Don’t expect your baby to drink a measurable amount or satisfy their thirst with the sippy cup. In the beginning, it’s more about developing skills and habits early, than the actual function of the cup.

The earlier you introduce them, the more tantrums you can avoid during the transition.

Consider giving your baby an empty sippy cup to play with – just allowing them to handle the item may make them more likely to accept it when you use it with liquids. When the family is eating, let baby have a sippy cup. Then see if you can get baby to mimic you as you take a sip from your own cup.

Whether you’re working with an infant or an older baby, until your child gets the hang of drinking from a sippy, remove the valve. While it prevents spills, it also makes the liquid harder to extract from the cup, potentially causing your child to get frustrated.

Allow the water to flow freely – and, yes, messily – until they understand how the cup works. Then, replace the valve when they’re ready.

3. Start With A Silicone Spout

The flexible feel of a silicone spout is familiar in the mouth of a bottle-fed baby, so it may make the initial transition easier. For my kids, the magic product was the Nuby. These days though, many manufacturers make sippy spouts compatible with their bottles to aid in the transition.

My kids – who rejected every single sippy known to man and had me terrified I’d be packing bottles in their school lunches one day – just loved the silicone spout! They accepted it the first time they tried it, and after they got the hang of it were happy to accept any other spout available, whether soft, hard, or straw.

4. Offer Something Besides Water

Yes, water is best for your baby. But it’s also boring and flavorless, which makes it difficult to entice a seemingly uninterested baby. For their initial introduction to the cup, fill it with diluted juice, and rub a little of the sweet juice on the spout.

Bring the spout up to their lips, allowing them to taste the sweetness. More often than not, they’ll be interested enough to figure out how to get more. Once they’ve gotten the hang of the sippy, revert to only offering water with meals.

5. Offer It Instead Of A Bottle

After your child has physically mastered the sippy cup, start to use it as a replacement for bottles at regular bottle-feeding times.

Fill the cup with formula and feed it to them instead of their bottle. If you are exclusively breastfeeding, offer the cup at mealtimes with their solid food and don’t worry about feeding your baby milk in a sippy cup, unless you are specifically trying to wean them from nursing.

6. Go Easy On The Nighttime Bottle

When you’ve effectively replaced all your child’s bottles with sippy cups, you still need to get them on a “big-kid” eating schedule. If your child is accustomed to a pre-bedtime feeding, gradually reduce the volume of their nighttime bottle (now cup). Instead, feed them a protein-rich snack just before, to fill their belly.

You can also start to create some time between the final feeding and bedtime. If you typically give them their last milk in their nursery, feed them in the living room instead. This helps you slowly break their bedtime association with milk, while still making sure they go down with a full belly.

As an alternative to slowly replacing bottles with sippy cups, you could simply get rid of all bottles at once and make the complete transition to sippy cups overnight. While it may create some initial stress, the transition will be much quicker.

“Follow through” will be your number one parenting rule, so you might as well start now and get used to it.

Once you decide to offer your child a sippy, do not give in to their protests to revert to bottles. Children learn quickly, and after you give in once, they’ll do everything in their power to get you to do it again.

9. Quit All Bottles Around Age One

If your baby hasn’t reached the one-year mark, strongly consider getting them off the bottle around the time their birthday arrives. After that, they can develop stronger attachments to items, including bottles, and breaking the habit can be much more difficult both for you and your baby.

You may have heard horror stories about trying to wean babies from the bottle, but the truth is if you time it right, it can be done with minimal drama. Add that to the health risks from bottle-feeding too long, and it’s enough to motivate any mama to transition to the sippy.

What’s your best tip to wean a child from the sippy cup? Tell us in the comments! Don’t forget to share this information with a mama who needs to know.

Which Philips Avent Nipple Sizes Should I Be Using? 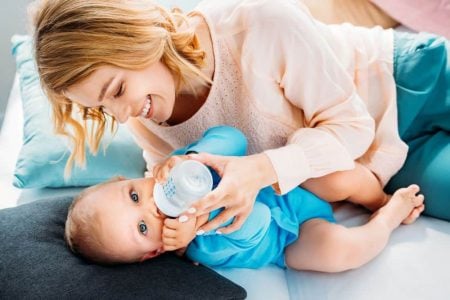 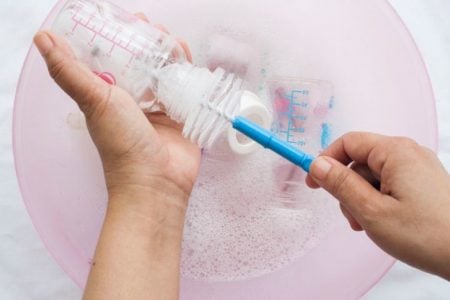 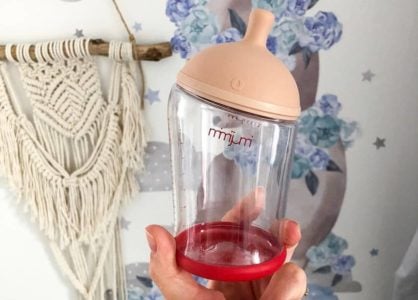 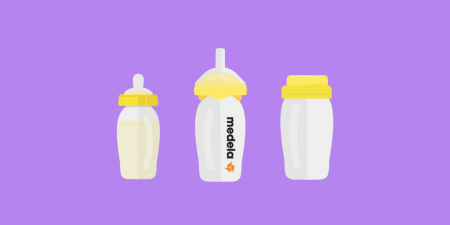 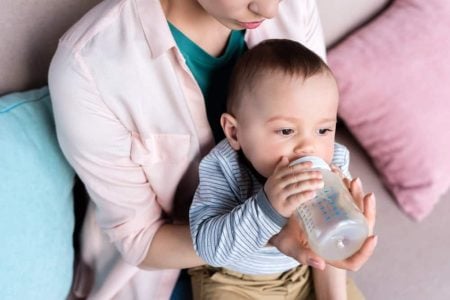 Is Your Baby Ready to Hold Their Own Bottle?