Did you take a home pregnancy test and get a faint line?

You’re not alone! We’ve been there, staring at that hint of pink and wondering if it’s positive or not. We know how nerve-wracking it can be when you’re waiting to find out if a new addition is on the way. Although we no longer have to wait for months to be certain we are pregnant, even minutes and days can seem like ages.

So, what do you do when you’re staring down a test, wondering if that faint line is a true indication of pregnancy?

We’ll help you figure out if your pregnancy test is positive or not and discuss what to do in either case.

What exactly causes that line on a pregnancy test to appear? The answer is a little hormone called human chorionic gonadotropin (HCG) (1).

Your baby’s placenta makes HCG to help nourish the embryo. HCG is vital in maintaining the proper levels of the main pregnancy hormones estrogen and progesterone.

Pregnancy test strips are specially treated so when your urine hits them, they conclude whether HCG levels are detected. The dye does not stick on the test line if no HCG is detected. But if it is, the test line will change colors, making two lines appear in the window instead of one.

If you take a pregnancy test before you have missed your period and get a faint line or even a negative result, do not fret. Not all pregnancy tests are created equal, and some require more HCG to show a positive result than others.

What Does a Faint Line Mean?

If your pregnancy test shows a positive result, this is what could be happening.

Have you still not had your period? Did the positive results come up within the allotted time frame? Can you see the line without squinting or holding it up to a light, even if it’s faint?

Congratulations, you are probably pregnant.

Although the amount of HCG in your body doubles every two or so days, it can take a few days for that line to go from faint to dark (2). Levels of HCG can be detected in the urine after about two weeks from conception. The levels will reach their maximum at 8-11 weeks of pregnancy.

If your test line is light but visible, chances are you are testing early, or you possibly conceived later than you thought. As the days go on and your HCG levels rise, any new tests you take should continue to get darker.

Most pregnancy tests have instructions on the packaging. Make sure to read and follow them for the most accurate results.

If you choose to use a traditional pregnancy test instead of a digital one, there is always the chance you could get an evaporation line, often called an evap or an indent line. That is because every pregnancy test comes with two lines: a control line and a test line.

Even if your test does not pick up any HCG, that test line is still there, and when the test dries, it can often be seen.

So how do you know if the line is a positive result or simply an indent? If the line has no color or does not appear until after your test has dried, you can assume it’s an indent. For this reason, you should never read a pregnancy test after the allotted time, which is often 10 minutes (3).

If a line appears within the time frame, but you can’t tell if it’s a positive or an indent, you can also use an app or invert a picture of the test. If the line has any color, it will be visible while inverted. If it doesn’t, the test is probably negative.

A chemical pregnancy is a term used to describe an early miscarriage, usually before five weeks of gestation, or one that happens before the fetus can be detected on an ultrasound. About 50 to 75 percent of these occur during early pregnancy and generally do not affect a woman’s ability to conceive again later (4).

There is no definitive reason as to why chemical pregnancies occur. Many believe they are often due to chromosomal abnormalities in the embryo.

Some believe that often these embryos would not have been viable, so the body naturally terminates them and does not allow the implantation process to complete.

The good news is that chemical pregnancies typically have no impact on your ability to get pregnant and have a healthy pregnancy in the future. And it is usually safe for you to try to conceive immediately after a chemical pregnancy.

Some people are at higher risk for chemical pregnancies, including women above age 35 and those with medication conditions for which they are not getting the proper treatment. Speak to your doctor if you have any concerns about your medical condition and the risk of a chemical pregnancy.

Did you take a pregnancy test that displays a darker line, but when testing at a later date, the line appears lighter? Did you see a fetus on ultrasound but then get a faint positive on a test afterward?

Unfortunately, if this is the case, you may be suffering a miscarriage.

Miscarriages are pregnancy losses that happen before 20 weeks of pregnancy. Most of them occur during the first 13 weeks.

Miscarriages can come without any symptoms other than bleeding, but some common symptoms include back pain, cramping, diarrhea, and even contractions.

What You Can Expect

If you are miscarrying, your HCG levels will start to drop, but you could show a faint line on a pregnancy test for several days and even weeks due to lingering HCG in your system (5).

While nothing can be done to prevent an early miscarriage, you can talk to your doctor if you feel the need. If this has happened more than once, they might want to run tests to ensure there are no underlying issues such as low progesterone or other hormonal issues.

Your doctor can also advise you about when it’s safe to start trying to conceive again.

Over the years, many different home pregnancy tests have made their way onto the market. But with pink dye, blue dye, and even digital pregnancy tests, which one should you choose?

We recommend anything but a blue dye. That’s because blue dye tests are notorious for evaporation lines. These evaporation lines tend to have a grey tint because of the blue dye running across during the testing process. This can make them look like a faint positive when, in fact, no HCG was picked up.

So, with blue dyes out, should you reach for a pink dye test or a digital test? It depends on where you are in your cycle.

While digital home pregnancy tests are easier to read, they tend to be less sensitive than pink dye tests. If you want to test before you miss your period, we recommend using a pink dye test.

If you get a negative result but don’t trust the test results, repeat the test. Do this after at least three days to allow your HCG levels to increase.

It’s often said for best results, you should take a pregnancy test with your first-morning urine, but does it really matter? The answer is yes, sort of.

We recommend taking a pregnancy test first thing in the morning because that is when your urine is the most concentrated. The more concentrated your urine is, the higher the concentration of HCG in it. We especially recommend testing your first-morning urine if you are testing before or immediately after a missed period.

If evening rolls around and you just can’t wait to test, we understand. But there are a few things you should keep in mind:

What To Do if You Get a Faint Line Pregnancy Test

If you see a faint test on your pregnancy test, here are some things you can do:

Because some pregnancy tests require higher HCG levels than others, your test might not be picking up enough of the hormone to cause a dark line just yet (6). If you still see a faint line after a few days of testing, it might be good to call your doctor.

Your health care provider can do a blood test to determine if your HCG levels show you are pregnant. They can also see if your HCG numbers are going up as they should be. In the meantime, start taking a prenatal vitamin, just in case you truly are pregnant, as it can help prevent birth defects.

The blood test can tell the amount of HCG in your body and determine how far along you are in your pregnancy.

2. Ask Your Doctor for an Ultrasound

If you test again and are still getting a faint line, it might be a good idea to ask your doctor for an ultrasound. This is especially important if you are experiencing abdominal or pelvic pain.

These could be signs you are experiencing an ectopic pregnancy, where the embryo implants inside the fallopian tube instead of your uterus.

It’s important to detect an ectopic pregnancy early because the fallopian tube can rupture if the embryo is not removed. This can affect a mother’s fertility, cause severe internal bleeding, and in severe cases, can even result in death (7).

Ideally, your doctor will do both an ultrasound examination and a serial HCG test, which involves two quantitative HCG blood tests to be taken two days or so apart to see if the appropriate rise in HCG is occurring.

Which Pregnancy Tests Give the Best Early Results?

Not all pregnancy tests are created equal. Tests vary in price, sensitivity, and how they give you your answer. If you want to test before your period is due, it is best to choose a test that can detect HCG at a low level.

Below is a comparison chart to help you choose the test that is right for you:

Dr. Njoud Jweihan is a medical doctor in Atlanta, Georgia with a passion for primary care and women’s health. She has over nine years of medical education and training experience. She also enjoys cooking, traveling and is excited to welcome her first child this summer!
We won't send you spam. Unsubscribe at any time. 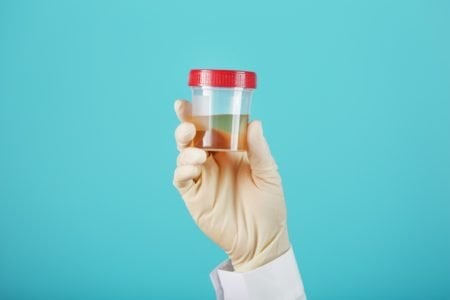 Is the Bleach Pregnancy Test Safe and Reliable? 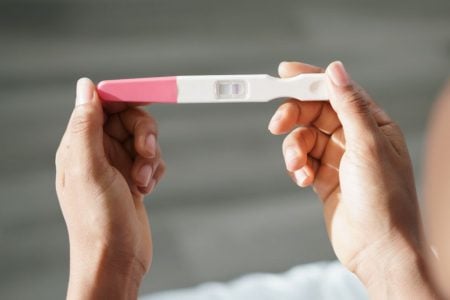 Missed Period But Negative Pregnancy Test? (What To Do)