Growing up, my mom was, and still is, an avid tea enthusiast. In her eyes, there’s nothing that a warm brew of chamomile can’t fix. Now that I’m a mom, I started wondering, “Can I give my baby tea?”

New parents often receive advice to steer away from anything other than breast milk and formula (1). But, many herbs, like dill and peppermint, are used synthetically for upset tummies, even for babies.

So, is the tea form that different? We’ll see what the answer boils down to.

Can I Give My Baby Tea?

You can give your baby tea if they’re six months or older, but only in moderation.

Prior to six months old, it is only safe to feed your infant breastmilk or formula. Other fluids are not balanced in their electrolyte content, and your baby’s immature kidneys cannot handle them. It is also important not to replace breast or formula feedings with tea. This can result in poor weight gain, and lower than optimal iron intake (2).

As many tea drinkers will know, herbal teas can have positive effects on the body of adults. They help us relax, energize, and improve our mood after a hard day.

With babies, you shouldn’t offer just any type of tea. The best ones are those like chamomile that aid sleep and digestion (3).

Other herbal teas that are considered safe in moderation include (4):

Still, there hasn’t been a lot of research into how teas affect babies. Some herbs are generally labeled as safe for babies. However, you should always keep quantities small, and we suggest you consult your pediatrician first (5).

Giving your baby tea as an alternative to breast milk too often can cause a decrease in your supply. Breast milk works as an on-demand supply, so if your baby isn’t feeding as much, your body begins to produce less (6).

Chamomile is known as a carminative herb. It contains properties that allegedly prevent gas formation and promote gas expulsion. Some suggest that it works by relaxing the small bowel muscles, making it easier to pass gas and bowel movements.

Another great benefit of chamomile is that it’s a mild sedative. Many adults take it before bed. It even gets a mention to that effect in the Peter Rabbit story.

Chamomile can soothe your baby. but use it in moderation — giving them a cup of chamomile won’t help them sleep through the night.

The last benefit of chamomile that we’ll mention is it’s also anti-inflammatory (7). People have been using it for thousands of years — it’s still as popular, if not more so, today.

Chamomile and Other Herbal Teas for Colic

Chamomile can alleviate many things, but when it comes to colic, it’s a gray area.

Baby colic is defined as a condition where a baby cries excessively during the first 12 weeks of life. Experts aren’t exactly sure what’s happening, but suggest it has to do with causes such as gas, overfeeding, hunger, or intolerance to certain substances (8).

Some specialists have experimented with giving babies younger than six months chamomile for colic. In one study, doctors administered a blend of German chamomile, fennel, vervain, balm mint, and licorice to babies between two to eight weeks.

This clinical trial showed that chamomile tea helped over half of the babies in roughly seven days (9). There were no significant side effects reported. But parents looking for relief from frequent wakings throughout the night were out of luck — it didn’t seem to affect nighttime wakings.

In another trial, doctors administered chamomile and apple pectin to babies experiencing acute diarrhea. Parents reported that the bout ended earlier than those who were treated with a placebo (10).

Once your baby is six months and older, chamomile tea might be an alternative to try.

Chamomile has proven many times to soothe the symptoms of colds, particularly when inhaled in its steam form. Although it won’t cure a cold, its calming effects can make sick children more comfortable.

There are only a few side effects associated with chamomile tea. If either you or your partner is sensitive to the herb, then it’s best to avoid giving it to your child. People with a ragweed allergy will also have a hard time drinking chamomile (11).

If you’re in doubt, contact your pediatrician. Otherwise, there are other carminative herbs you can use to aid a baby’s digestion, like fennel.

Teas to Steer Away From

Not all teas are safe for babies — some can be harmful. Teas to keep away from include:

Japanese star anise is a neurotoxic plant (14). It contains sesquiterpene lactones and should not be given to babies of any age.[/callout[

Here for the Tea

Can I give my baby tea? Yes, if your baby is six months and older, giving them a few sips of herbal tea during sickness may soothe them.

When it comes to infants, however, parents should always err on the side of caution. Unless otherwise directed, stick with breastmilk or formula.

When giving tea, ensure that it’s listed as safe. Avoid caffeinated teas, linden flower, and star anise as these can cause poisoning and other afflictions. Always give it in moderation, and don’t substitute tea for breastmilk or formula. 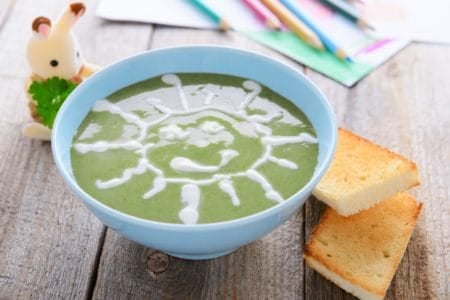 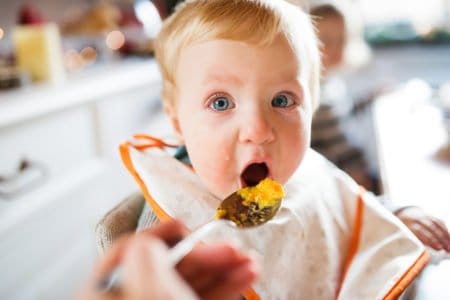 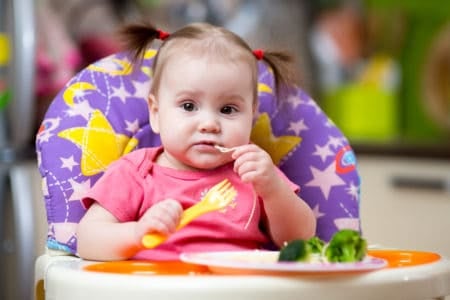 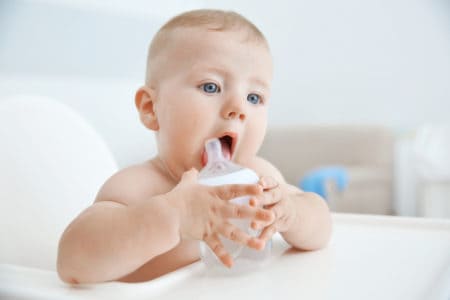 When Can Babies Have Water to Drink? 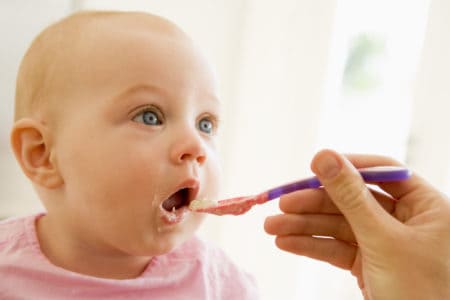 Can I Give My Baby Hummus? (Benefits of Doing So) 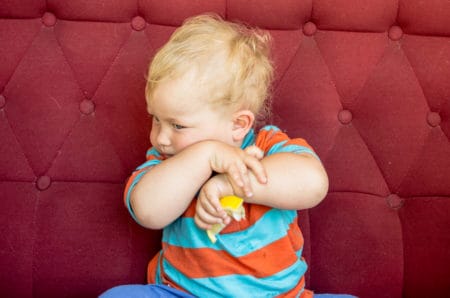 Can I Give My Baby Lemon? (3 Concerns to Consider)