Have you decided to use flats or prefold cloth diapers but now find yourself overwhelmed thinking about how to fold them?

Folding diapers can seem intimidating at first, but it doesn’t have to be. Some moms even find trying new diaper folds to be fun.

We will teach you ten different ways to fold cloth diapers with step-by-step instructions. With a little bit of patience and practice, you will be a diaper-folding expert in no time.

You might have chosen to use flats or prefolds because you wanted to save money. Or maybe you like the idea of using a more traditional diapering method. But what exactly are flat and prefold diapers, and how do you tell the difference?

When you tell your grandmother you will be using cloth diapers, the first thing that will come to her mind is flat diapers. Flats are the most traditional cloth diapers, and the idea of you using them might make her shudder with the memory of safety pins and rubber pants.

Flat diapers consist of a large, flat sheet of cloth that creates a diaper when folded. They are the most budget-friendly cloth diaper because you can make a flat out of nearly any piece of fabric.

You can use dish towels, flour sack towels, receiving blankets, and even old t-shirts to make flat diapers if you want to.

You can use the same flat diapers from birth until diaper training as you can fold them to fit a baby of any size. You can easily double them to create more absorbent layers, and they aren’t super bulky under your baby’s clothing.

Flats are the easiest cloth diapers to maintain. They are easy to wash and quick to dry, making laundry day a lot simpler than if you use other diapering methods.

Prefold diapers, like flats, are a piece of fabric that you can fold to create a diaper for your baby. But unlike flats, prefold diapers come somewhat, well, pre-folded.

Prefold diapers are smaller and thicker than flats, making them more absorbent before folding.

Instead of folding the diaper to create absorbency, you only have to fold it to fit your baby.

Prefolds are the second most affordable diaper option after flats. Like flats, they are easy to care for and can be doubled to create more layers for heavy wetters.

But unlike flats, one diaper will not get you through from birth to potty training. Prefolds come in multiple sizes. Some brands offer two standard sizes, and some offer up to nine sizes to grow with your baby.

What Else Do I Need?

While cloth diapers have come a long way since your grandmother used them, flats and prefolds still require a few extra accessories.

Instead of using safety pins, you can now keep your prefolds and flats closed with a Snappi fastener. A Snappi is a T-shaped rubber tool with plastic teeth on each end. These teeth attach to your baby’s diaper to keep it together.

Rubber pants are out too, although I’m sure you could still find them if you wanted to. However, you’ll still require waterproof covers since flats and prefolds are not waterproof.

Many moms use diaper covers made of polyurethane laminated fabric, referred to as PUL. The covers look like the outside of an all-in-one or pocket diaper and close with either snaps or Velcro fasteners. Many covers come in one-size options, so they can be adjusted to fit from birth to potty training.

How to Fold Prefold Cloth Diapers

I’m going to let you in on a little secret — all of the methods for folding prefold diapers can also be used for flats. Many of the folding methods for flats can be used for prefolds — but not all, as flats are bigger and require additional folding for absorbency.

Here we’ll explain five easy ways to fold a prefold diaper. And remember, you can bulk up any of these methods by adding another prefold (folded into the “pad fold”) in the center of your diaper.

The angel fold is one of the most popular diaper folds for prefold and flat diapers. 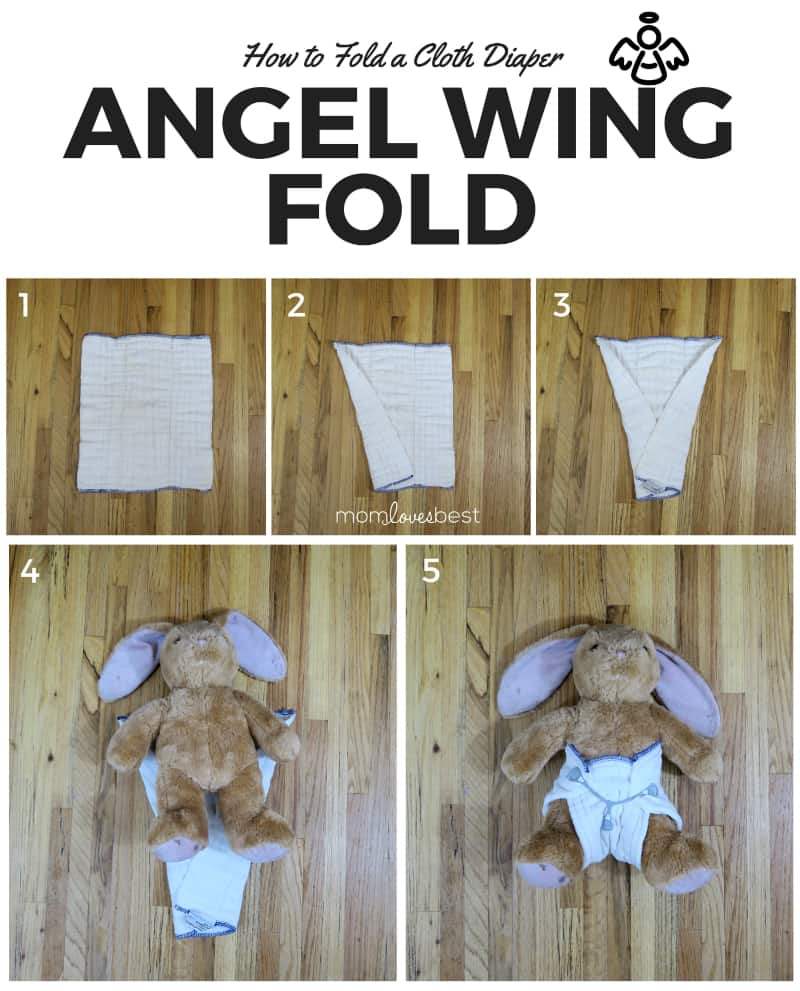 To do the angel fold, lay the diaper on your changing surface, then fold the front half into thirds. Leave the back half lying flat. It’s called the angel fold because the flat back corners are referred to as “angel wings.”

Fold the front of the diaper upward over your baby, and wrap the wings around your baby’s sides until they meet the front. Use your Snappi to attach the wings to the front, and put the cover on top of the diaper.

The jelly roll fold is very popular for newborn and exclusively breastfed babies because the rolls help contain any liquid stool from leaking onto the cover. I used this fold even as my children got older, especially if they had an upset stomach. 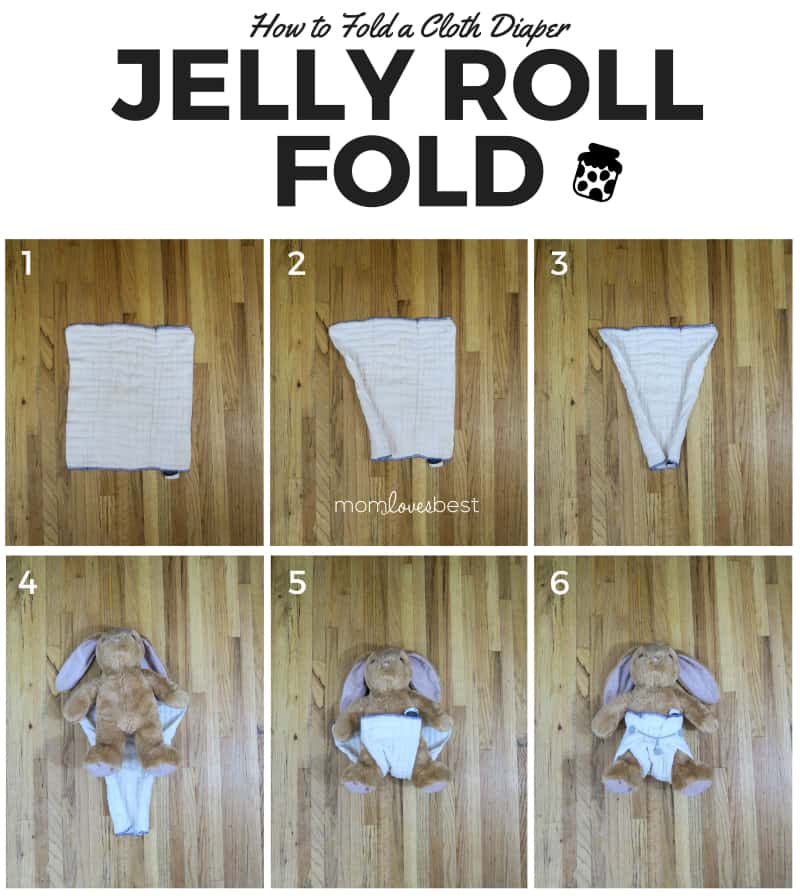 The pad fold, often called the tri-fold, is the simplest folding method. It basically turns your prefold diaper into an insert. It can be used inside a traditional cover or stuffed inside pocket diapers. 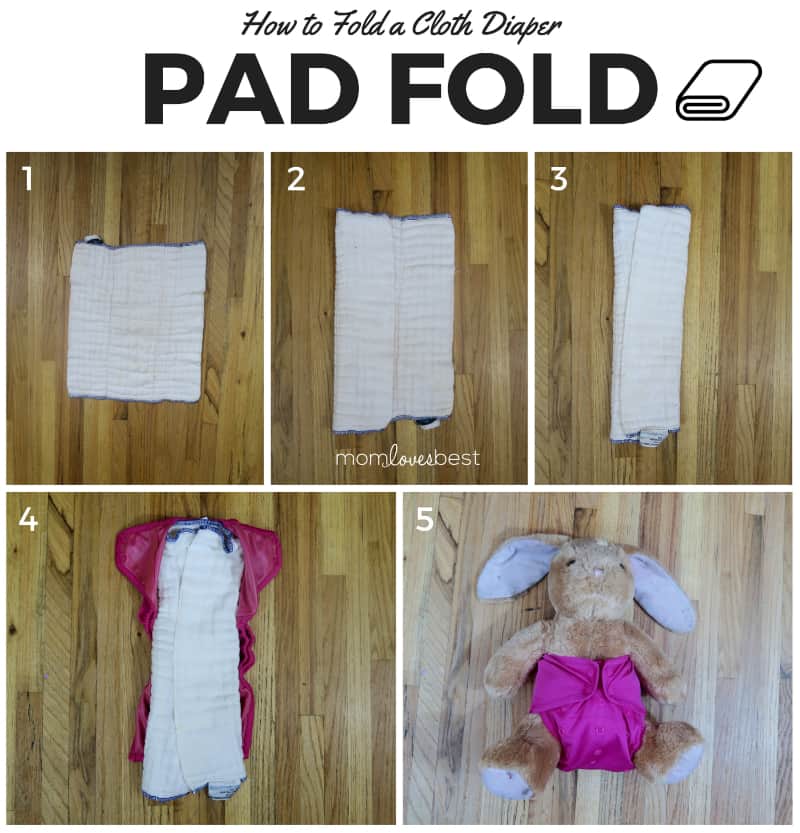 Start with the diaper lying flat on your changing pad. Fold one outside section over the center at the seam. Then fold the other side on top of the first.

Lay the diaper inside a cover as shown, or place it inside a pocket diaper.

The newspaper fold is a common variation of the angel fold. It can be used if your diaper is a bit too big for your baby or if you have a little boy or a tummy sleeper who needs extra absorbency in the front. 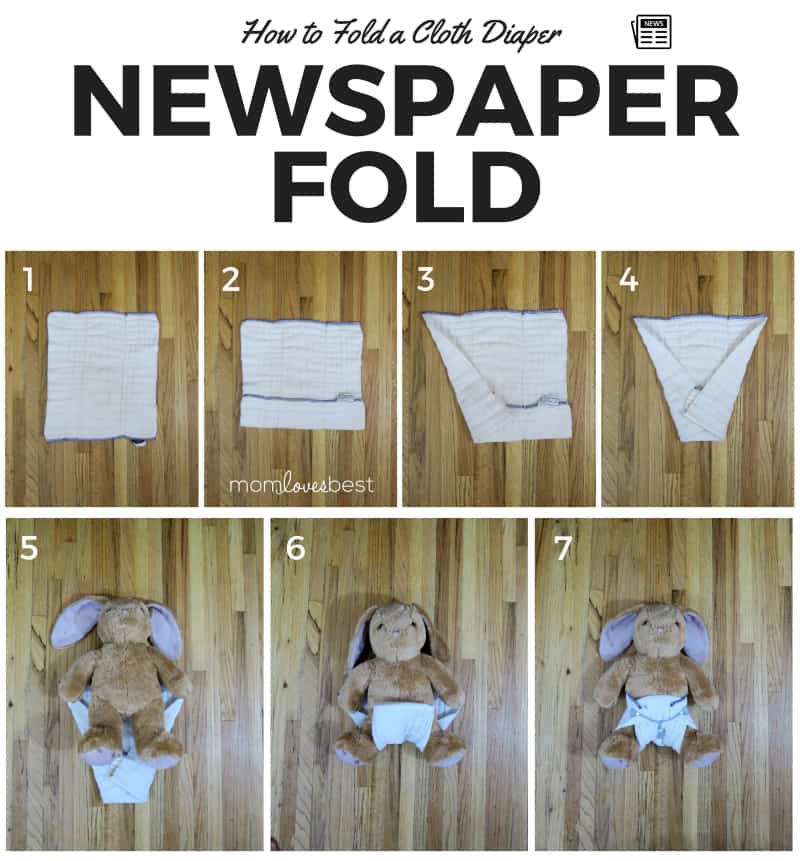 Place it under your baby, and fold the front part up. Then wrap the wings around your baby’s waist, and fasten it all with a Snappi.

The bikini fold is mostly used for little girls since they need more absorbency in the middle, whereas the newspaper fold gives boys absorbency in the front. I don’t recommend this fold for exclusively breastfed babies since it’s not very efficient at containing liquid poop. 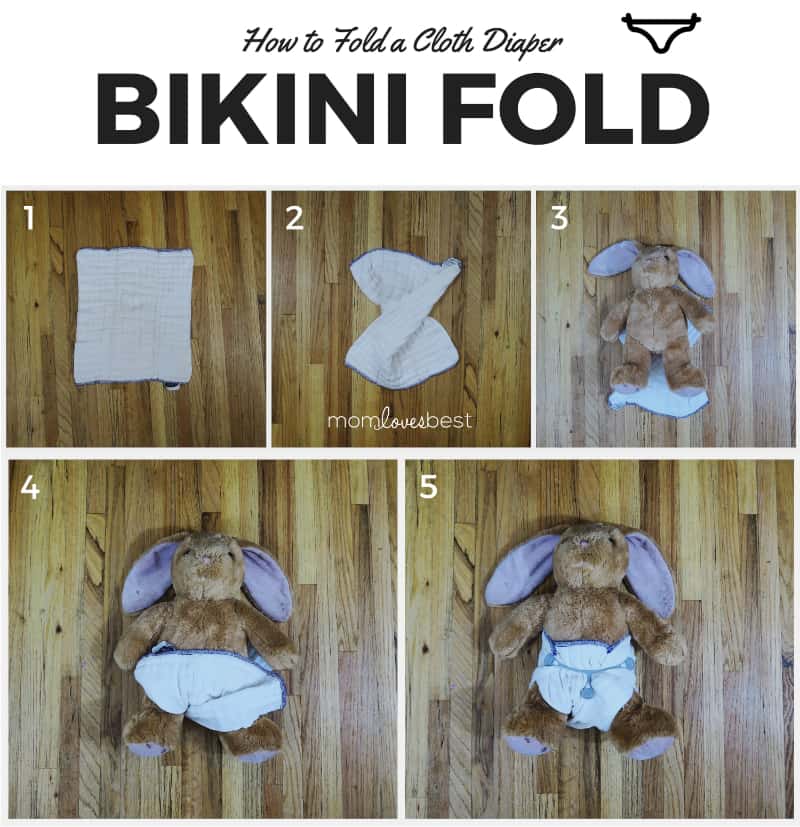 Start by laying your diaper flat, then twist the middle at a 180-degree angle. Pull up the front, tuck the front corners behind your baby, and wrap the back corners around the front of your baby’s waist. Fasten with a Snappi.

How to Fold Flat Cloth Diapers

Flat diapers are more versatile than prefolds. That’s because there is simply more of the diaper available for you to fold.

The diaper bag fold got its name because it’s easy to fold ahead of time and is compact when folded, so you can easily place it in your diaper bag to take with you. 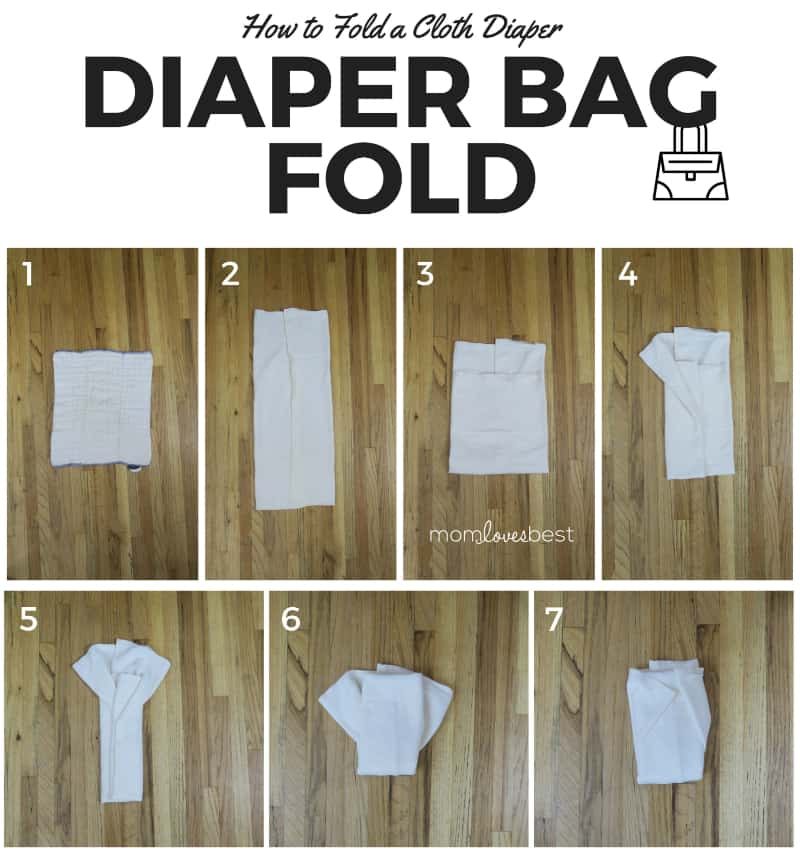 To do the diaper bag fold, start by laying your diaper flat. If it’s a rectangle shape, place the longer end facing you.

Fold the two sides into the center, almost touching each other on the edges. Then, fold the bottom part of the diaper up to fit your baby.

Next, fold the front part of your diaper into thirds at an angle so the two sides sit on top of each other. Then fold the back of the diaper down a few inches to create wings and a little pocket, which will prevent poop from leaking.

Finally, lay your baby on top of the diaper, pull the front part up, and wrap the wings around your baby’s waist before fastening with a Snappi.

If you want to pack your folded flats into your diaper bag, fold the diaper in half after folding the back down. Then wrap the wings around the front of the diaper before putting it into your bag. 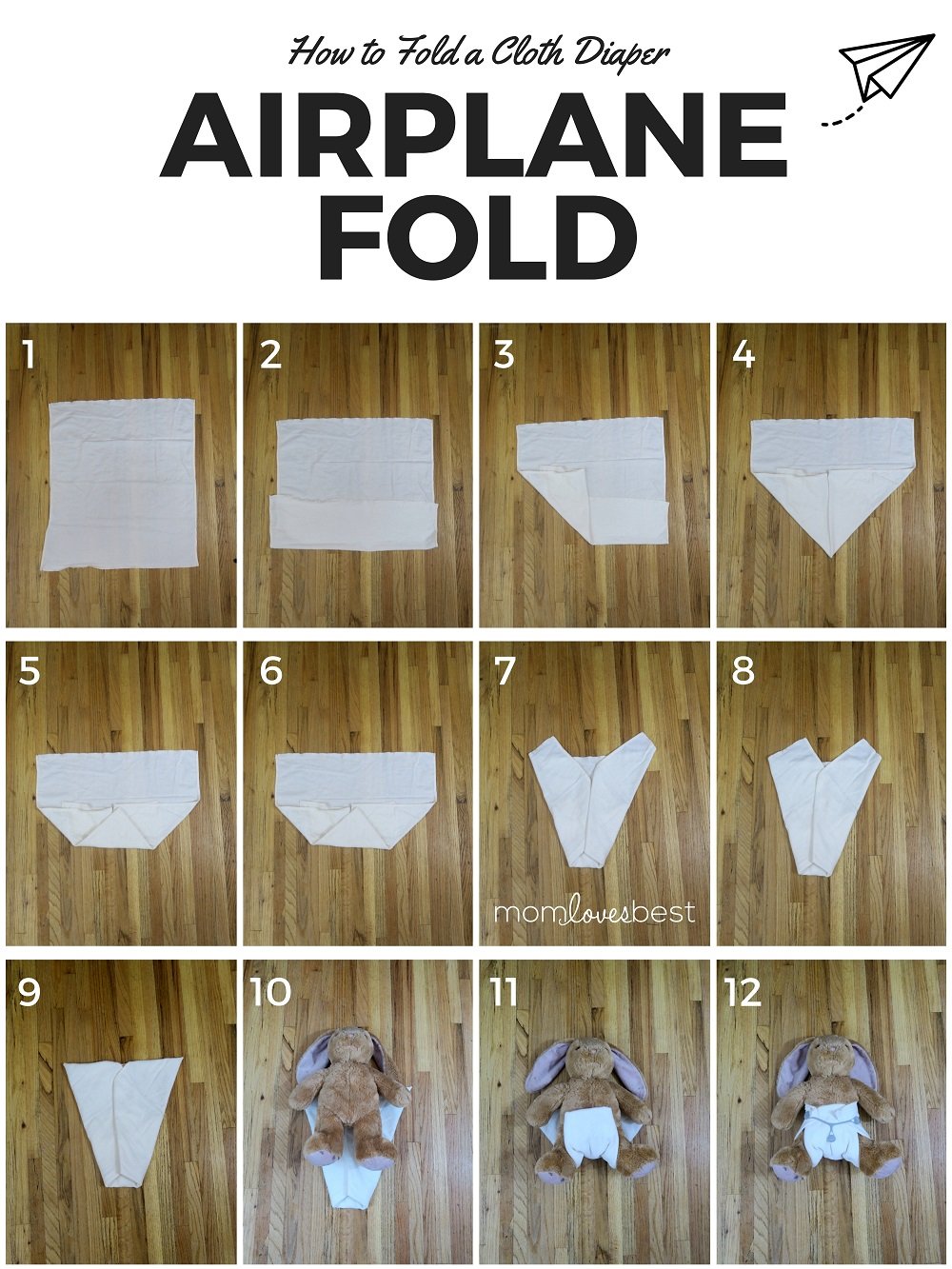 The airplane fold is a fold that has most of the layers in the front of the diaper, making it great for heavy wetting boys.

First, lay the diaper flat on your changing surface, and fold the bottom part up to make your diaper completely square, if needed. Depending on the size of your diaper, this might be four or five inches.

Next, take the top left side of your diaper, which was previously unfolded, and fold it toward the center. Do the same on the right side. If you want to, you can overlap these two parts to create more bulk in your diaper.

Once that is done, tuck the two overhanging top corners down into the folds of your diaper. You can then place your baby on top, fold the bottom part up on your baby, then wrap the wings around your baby’s waist to hold the diaper closed.

The triangle fold is an easy fold for beginners. We like it because it’s quick to use, and there really isn’t any way to mess it up. 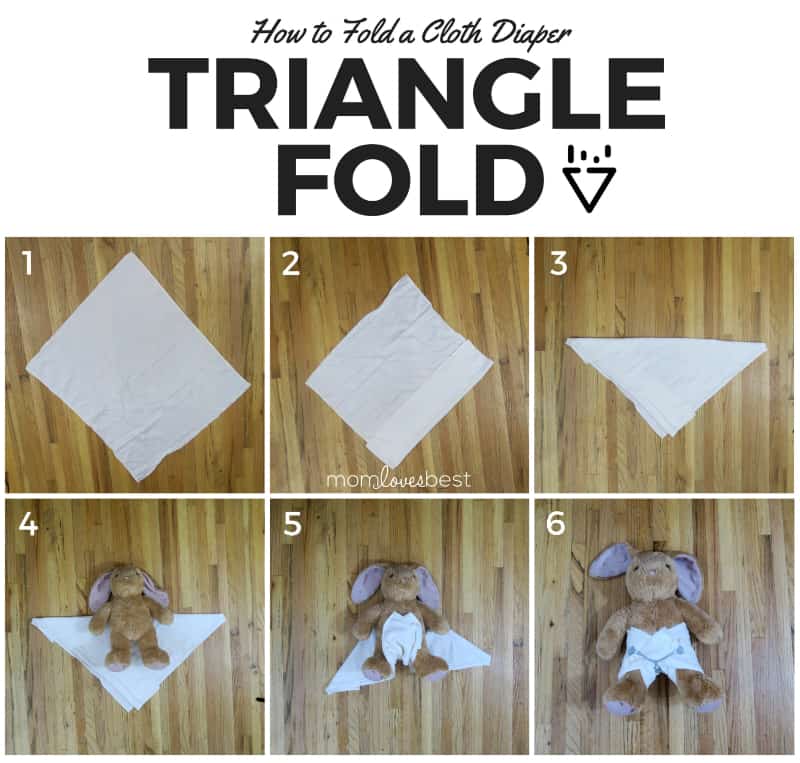 Lay your diaper out flat. If your diaper is a rectangle, fold one end up far enough to make the diaper square. Then fold the diaper in half to form a triangle, ensuring the point is facing you.

The kite fold is a fun fold, and it gets its name from the kite shape you make in the first few steps of the folding process. This fold is a bit harder to master, but once you do, it’s great because it offers six layers of absorbency where it’s most needed. 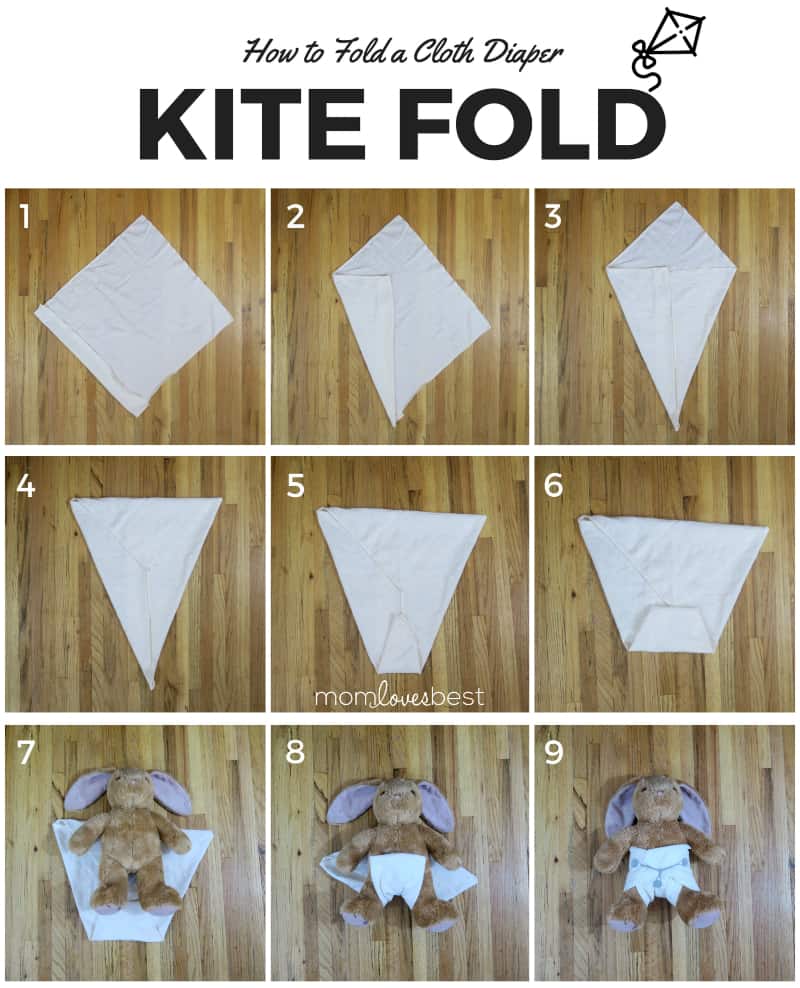 Lay your diaper flat on your changing surface, positioning it so that one corner directly faces you on the bottom. If it isn’t a perfect square, fold down one side to square it. Fold the right corner over to the middle of the flat, then repeat with the left corner.

The name of this fold alone might intimidate you, but don’t let it. This fold isn’t complicated. And because the bulk of this fold’s absorbency is in the middle of the diaper, it is great for boys or girls. 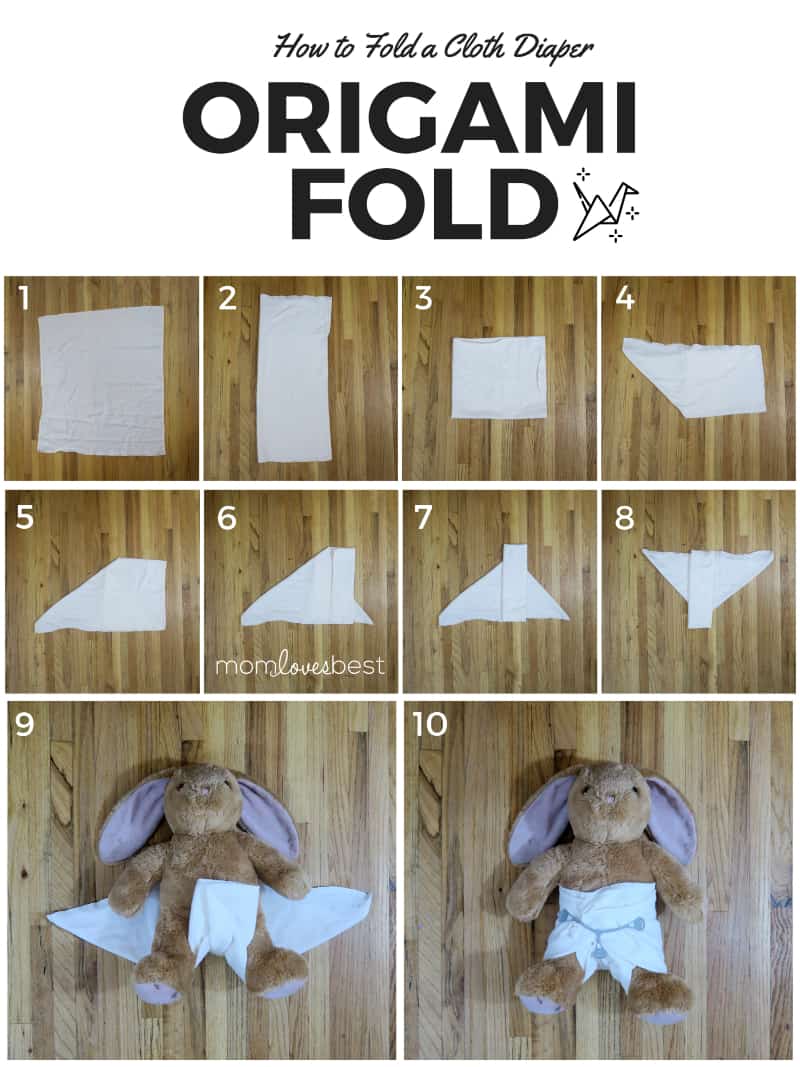 Lay the diaper flat, then fold it in half from bottom to top. Then fold the diaper again to make a quarter fold, going from left to right. Next, you will pull the top layer of the top left corner to your left to make an upside-down triangle, then flip the entire diaper upside down.

On the right, you will have a square — pick that up and fold it over to the center of the diaper. Next, rotate the diaper so the wings are on the top. You can fold over the top part of the wings down if you need to adjust for your baby’s length.

Finally, lay your baby on top of the diaper. Fold the bottom up over your baby and wrap the wings around their waist. Secure the diaper, and you’re good to go.

Mary Sweeney, BSN, RN, CEN is an oncology nurse navigator and freelance medical writer. Mary has 4 years of experience as an officer in the Navy Nurse Corps. including emergency/trauma, post-anesthesia, and deployment medicine.
We won't send you spam. Unsubscribe at any time. 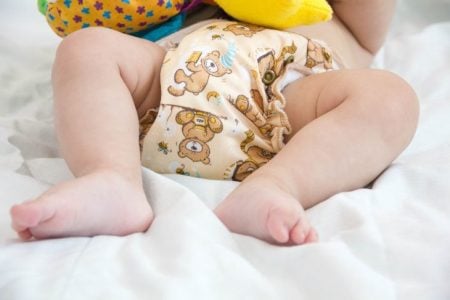 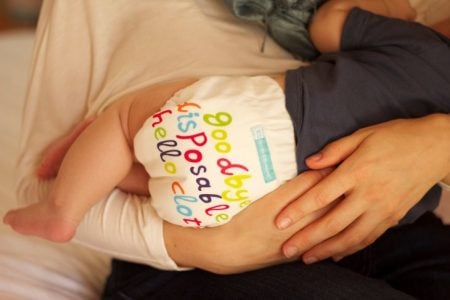 10 Cloth Diaper Benefits That Will Make You Want to Switch 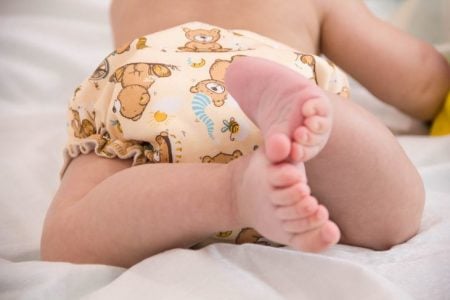 Why You Should Bleach Cloth Diapers 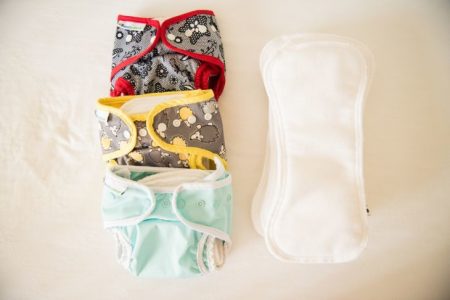 How to Get Free Diapers at Cloth Diaper Banks 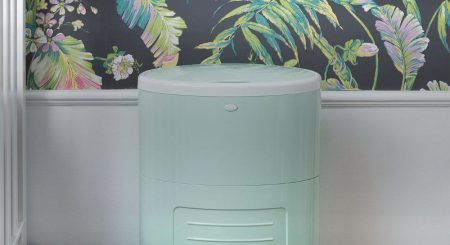 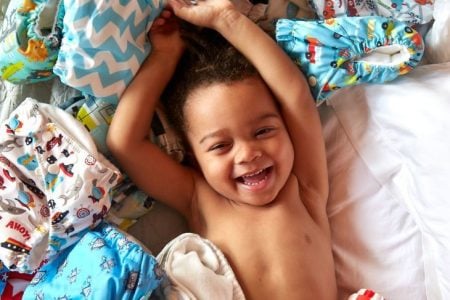