Is modesty important to you? Do you hate the idea of giving strangers a show when you‚Äôre trying to feed your baby?

If you‚Äôre worried about that, your best bet is getting a modest nursing cover that will keep your privates, well, private.

Two great ones to consider are the Milk Snob and Covered Goods — both provide great all-around coverage.

Side By Side Comparison

As you will notice from the following comparison table, these two products are almost identical when it comes to their specifications. 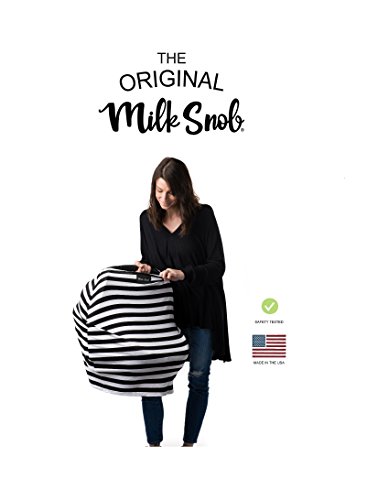 This is a multi-purpose nursing cover that you can also use as a car seat cover, cover for shopping cart, a blanket, or a highchair cover.

When you use it for breastfeeding, you can be comfortable that nothing will show unless you want it to.

The product has become a household name with breastfeeding mothers since appearing on the reality show SharkTank and receiving a $150,000 offer from Lori Greiner.

Let‚Äôs look at some of the key benefits of using The Milk Snob.

This stretchy nursing cover is easy to use whether you‚Äôre using it for breastfeeding in public, or you‚Äôre trying to put it on a shopping cart to protect your baby from germs.

Since it offers four-way stretch, it‚Äôs easy to fit onto the products you‚Äôre trying to cover it with — like car seats and highchairs.

It‚Äôs hard to make a quality nursing cover that serves so many purposes, but the Milk Snob seems to do the trick. The four-way stretch fabric lets it retain its shape, but also makes it easy enough to stretch over objects of different sizes.

When you‚Äôre a mom, you already feel like you‚Äôre struggling just getting out the door with all your baby gear and your baby. So it helps when you don‚Äôt have to feel like you‚Äôre in a life-or-death wrestling match with a shopping cart when all you want is to protect your baby from germs.

And because The Milk Snob is so big, it does even stretch over big shopping carts, not just the smaller ones. But you should be aware, once you stretch it out really big, it can seem to lose some of its ability to snap back.

This nursing cover doesn‚Äôt come with a pouch to store it in while it isn‚Äôt in use, which would really help keep it cleaner if you don‚Äôt want to wear it all day and just want to stick it in your diaper bag for when you need it.

Plus, it‚Äôs best to hand wash this item when it gets dirty, which isn‚Äôt the best for busy moms who would rather toss it in the washing machine.

What Makes The Milk Snob Better Than Covered Goods?

Both the Milk Snob and Covered Goods nursing covers are very similar. No matter which one you go with, they‚Äôll be stretchy and soft. 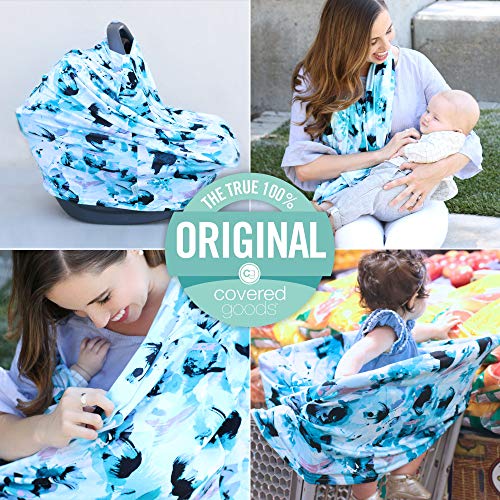 Covered Goods has four uses — it can be a nursing cover, car seat cover, infinity scarf, or shopping cart cover.

Not only will it help keep your hoo-hoo’s hidden while breastfeeding, but it can also protect your baby from germs, sun, and wind.

It’s made from 5% spandex which gives it that extra stretch and versatility.

Let‚Äôs look at what Covered Goods can offer moms.

Covered Goods is easy to use, but some of its uses are a little simpler than others.

When you‚Äôre using it as a nursing cover, it‚Äôs pretty straightforward when you‚Äôre trying to figure out how to use it.

It‚Äôs more difficult to use when you‚Äôre trying to use it as a shopping cart cover. It can be hard to drape properly onto the cart until you get the hang of it.

As a scarf, you‚Äôll have to keep winding it around and around so it circles around your neck several times, otherwise it will want to slip off to one side or over your shoulder.

When it comes to working as a nursing cover, Covered Goods is well designed. It‚Äôs long enough that women won‚Äôt have to worry about showing off their lower backs while they are breastfeeding.

Plus, it‚Äôs wider than many other nursing covers, which means it‚Äôs a good choice for bigger women too.

The biggest downside to the build quality of the Covered Goods nursing cover is that it can feel like it is starting to lose some of its ability to spring back into shape once it is stretched out too much.

Although this doesn‚Äôt come with a carrying bag so it will stay fresh and clean when you aren‚Äôt wearing it, the Covered Goods nursing cover is easy to clean. It can go in your washing machine on the cold setting.

And when you are done washing it, you can even put it in the dryer on low heat. That makes things a lot easier for busy moms who are too tired or frazzled to add hand washing an item to their to-do list.

What Makes Covered Goods Better Than the Milk Snob?

Depending upon what you‚Äôre looking for in a nursing cover, Covered Goods does offer some benefits the Milk Snob doesn‚Äôt.

Which Is Right For You?

Because these nursing covers are both multi-purpose and so similar, it can be difficult to choose between them. No matter which one you choose, it will be soft and stretchy.

If you‚Äôre a petite mom, the Milk Snob cover might be a better fit for you because it is narrower and shorter. You won‚Äôt feel like you‚Äôre being swallowed up by the cover when you wear it or use it as a scarf.

If you‚Äôre a plus-sized mom or a tall mom, you may want to go with Covered Goods because of the extra width and length it offers.

Jenny Silverstone is a professional writer, editor, and most importantly, the loving mother of two. Jenny's goal at Mom Loves Best is to help the other moms like her who are struggling and trying to do their best but feel totally overwhelmed.