Have you noticed some yellowish earwax coming out of your baby’s ears? Are you wondering if it’s safe to use a cotton swab to clean the drainage?

Babies get earwax buildup just like adults. However, they require a different method of handling that sticky situation.

In this article, our medical team will explain everything you need to know about baby earwax. We’ll let you know what you need to do — and what to avoid — when cleaning your baby’s ears.

Earwax is a naturally occurring protectant the body produces from dead skin cells and a sticky matter created by the glands. The medical term for earwax is cerumen (1).

Inside your baby’s ears are several glands called ceruminous glands. These continually produce a sticky substance that quickly mixes with skin cells and thickens.

Usually, earwax is either yellow, orange, or even brownish, with a dense, waxy feel. However, smaller children and babies tend to have a much softer and lighter texture.

Earwax is generally no big deal for your little one. It will likely build up, dry out, and eventually fall out (pretty gross, but that’s how it is).

The glands in your baby’s ears may produce more earwax than the body can get rid of, causing a buildup. Unfortunately, a buildup can also occur due to a well-meaning parent inserting a cotton swab into the baby’s ear canal.

A prolonged buildup of earwax can lead to decreased hearing and irritated ears.

What Is the Purpose of Earwax?

Earwax is an essential part of the ear. Earwax is thick and sticky so it can trap dirt, dust, or other particles that may enter the ear. Without earwax, the ear canal would be susceptible to infections and other unwanted intruders (2).

Besides acting as a barrier, earwax holds a few chemicals that can help fight off infections. These chemicals keep the environment inside your little one’s ears healthy and happy.

How Much Earwax Is Normal?

There is no typical amount of earwax your baby can have in their ears. Some may have more than others, and some babies produce more in one ear than the other.

If the doctor can see through the wax and into the eardrum, your baby’s ears are fine. However, if the wax is clogging up the view, the doctor will likely recommend that you use some drops.

How to Clean Your Baby’s Ears

When cleaning baby ears, there are more don’ts than do’s. Small ears are vulnerable and can easily suffer damage.

Ask any pediatrician, and they will likely tell you the best way to clean your baby’s ears is with a washcloth.

This method is not for cleaning the inner part of the ear. Instead, it will just remove some of the excess wax or dirt sitting on the outside.

You can also use a Q-tip for this. But keep it outside the ear only.

Here’s what you do:

Could It Be an Ear Infection?

An ear infection is when the middle part of the ear becomes inflamed. It occurs as fluid builds up behind the eardrum, where bacteria then spreads and triggers an inflammatory response.

Ear infections are prevalent among young children. Estimates suggest that approximately five out of six children will experience at least one infection before their third birthday (3). It is one of the most common reasons parents seek medical attention.

Children are much more vulnerable to ear infections. This is because their ear tubes are narrower than those of adults. Fluids can quickly clog up the system, where bacteria tend to gravitate toward.

Ear infections are more common in infants and toddlers because the connection between the nasal cavity and middle ear (eustachian tube) is horizontal, allowing any nasal fluid to pass through easily. As kids grow, the skull elongates and creates a more vertical connection, preventing the backflow of congestion (4).

If you suspect your little one has an ear infection, look for these signs before calling the pediatrician:

What Causes an Ear Infection?

It might be easy to think that a dirt buildup in the ear could cause an infection. However, dirt has little to do with these ailments.

Bacteria is the most common culprit of an ear infection. Your child may be extra vulnerable during or after having a sore throat or infection in any other part of the respiratory system (5).

The bacteria or virus that caused the previous infection is hunting for a new place to live. The ear, unfortunately, provides the perfect setting for these microorganisms.

As the bacteria settles in, it triggers an inflammatory response from the body. This response causes ear infection symptoms.

When Is It Safe to Pierce Baby’s Ears? (What You Need to Consider)

This is a common question — and for a good reason. As a mom who has often rushed her child to the doctor’s office, only to be told that the cause is merely an earwax buildup, I know how tricky it can be.

But fever and trouble sleeping are generally the telltale signs of an ear infection in a baby or small child.

If it’s nothing more than extra wax, you can usually see it by looking into the ear. Take a flashlight and gently tug the earlobe back and away from the head to get a better look. You will likely see brownish or yellow drainage.

If the fluids are milky-like pus, clear, or traces of blood are present, it could be an infection. An additional note about this: ear wax will not drain from the ear continuously or profusely; infected fluid will and warrants a doctor visit. 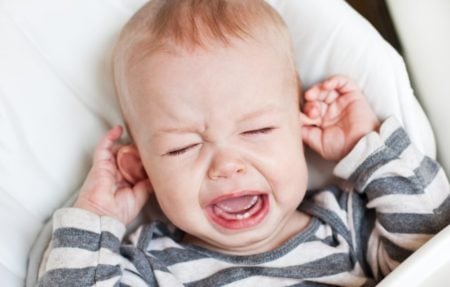 Remedies for Your Baby’s Ear Infection 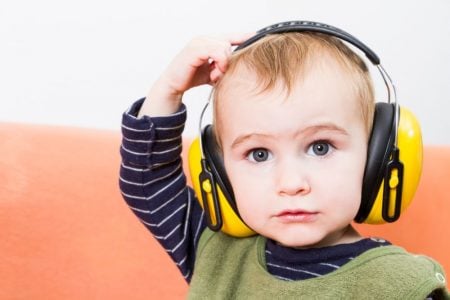 The Best Hearing Protection for Babies and Kids 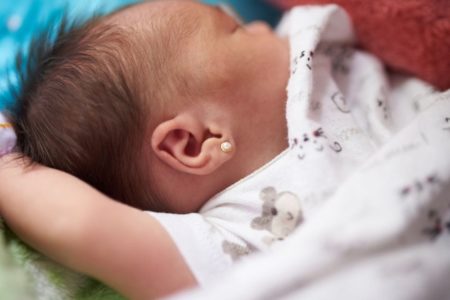 When Is It Safe to Pierce Baby’s Ears? (What You Need to Consider)