Teething is an all-around bummer. It seems to last forever; your child’s first set of baby teeth can come in as early as 3 months of age and continue filling in until your child is 3 years old.

It can be gut-wrenching to watch your infant in pain, and with 20 teeth coming in before your baby’s third birthday, teething can feel like an exhausting, near-constant, event.

For many parents, their natural inclination is to reach for a topical teething gel, which contains a numbing agent, to rub on inflamed gums. While it might be tempting to numb the pain (and lessen the tears), we’ll explain why teething gels are not only ineffective, but potentially harmful.

No. The active ingredient in many over-the-counter oral teething gels is benzocaine, a local anesthetic. The use of benzocaine in topical teething gels can lead to a serious — and potentially fatal — condition called methemoglobinemia, which causes blood to carry less oxygen.

Interestingly, many of the old wives’ teething symptoms no longer apply, which can actually make teething more difficult to diagnose. For example, the American Dental Association (ADA) does not consider fever, diarrhea, or rashes to be signs of teething, but tells parents to look for the following (1):

Not coincidentally, these are also the markers of all baby behavior throughout time and space. The easiest way to identify if your child is teething is to gently feel his gums for an emerging tooth.

The active ingredient in many over-the-counter oral teething gels is benzocaine, a local anesthetic. The most common OTC teething gels on the market include:

The use of benzocaine in topical teething gels can lead to a serious — and potentially fatal — condition called methemoglobinemia, which causes blood to carry less oxygen.

Symptoms, which can appear within minutes or up to 2 hours after use include:

The same goes for lidocaine, another anesthetic found in teething gels. In fact, lidocaine is far more potent; most products require only 2% lidocaine as opposed to 20% benzocaine. The Food and Drug Administration (FDA) warned parents in 2014 that lidocaine should not be used on infants and young children to soothe teething pain (2).

The FDA now claims the risks of lidocaine are greater than its benefits for young children, and has received 22 reports of “serious adverse reactions,” including six deaths and 11 hospital admissions (3).

In addition, teething gels can make swallowing difficult for babies, increasing the risk of choking or breathing in food. These products were ultimately banned for children under the age of two by the FDA in May 2018.

In the past, treatments sold as “homeopathic” were considered safe as long as parents checked the ingredients on the label and consulted their pediatrician before giving it to their child.

Strictly speaking, “homeopathic” refers to a remedy containing a small, diluted amount of a natural substance believed to have medicinal benefits.

Because they’re unregulated, many products sold as “homeopathic” are either made with too small an amount of that active ingredient to make any difference, or contain amounts so substantial that they can pose health risks, such as allergic reactions, to your baby.

For example, many “homeopathic” teething gels contain an unregulated form of belladonna, a toxic plant that can be potentially dangerous and cause heart problems and drowsiness (4).

In September 2016, the FDA formally advised against using any homeopathic teething gels, saying they can pose a risk to infants and other children.

We’ve provided a carefully curated list below of alternatives to ease your little one’s pain and hopefully get everyone sleeping soundly again.

If your baby is less than six months old, an infant pain reliever such as acetaminophen can help reduce the pain associated with teething.

Dosage is based on your child’s weight, so make sure you’re giving the appropropriate dose, or check with your doctor if you’re still unsure.

An anti-inflammatory, ibuprofen can help reduce the pain caused by inflammation of the gums for children under the age of 6 months. Teething pain is usually worse at night, so try giving your child ibuprofen before bed.

Doctors recommend giving your child liquid ibuprofen (Advil or Motrin) every six to eight hours as needed, but we recommend that you check the best dose with your pediatrician.

You can gently rub or massage swollen gums with a clean finger, or give your child a teething ring made of firm rubber to chew. Most experts advise against frozen teething rings, as they can bruise tender gums.

The American Academy of Pediatrics (AAP) advises against plastic teething rings, as they can contain chemicals that can affect your child’s hormones (5).

You can also let your child chew on a cold, wet (clean) washcloth. As with everything that goes into your baby’s mouth, you should always supervise your child when using a teething ring.

If your baby is older than 6 months and eating solids, offer a chilled puree or yogurt with a refrigerated spoon. You can also serve cold water from a sippy cup to ease the pain.

If you’re ever in doubt about pain, treatment or teething, you should always check with your pediatrician.

In the meantime, we think it’s best to avoid teething gels of any kind — the health risks just aren’t worth it, and there are better ways to take the bite out of teething pain. 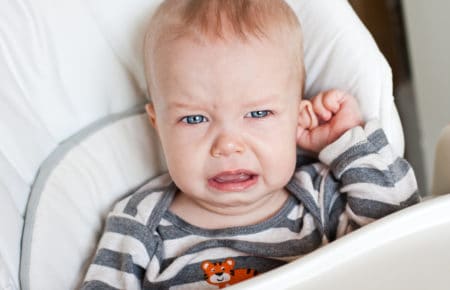 Teething vs. Ear Infection (How to Tell the Difference) 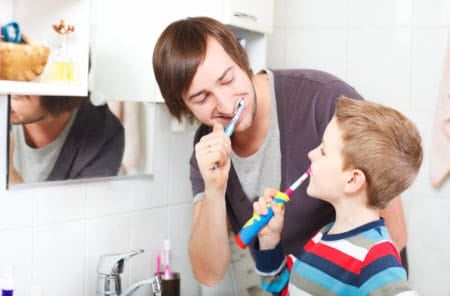 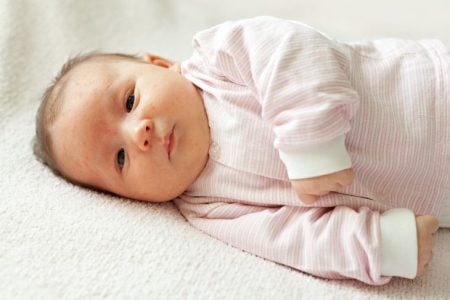 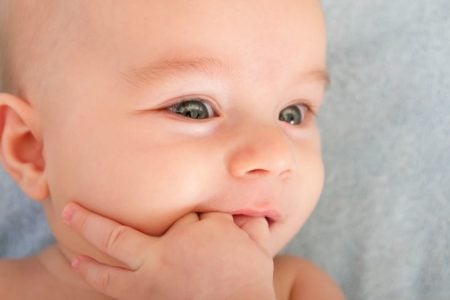 Teething in Babies: Symptoms and Remedies 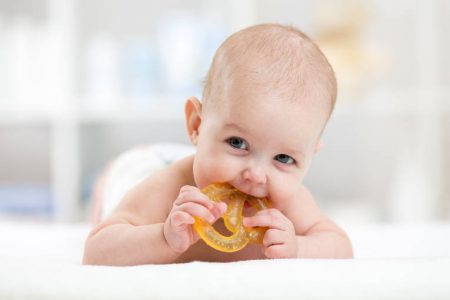 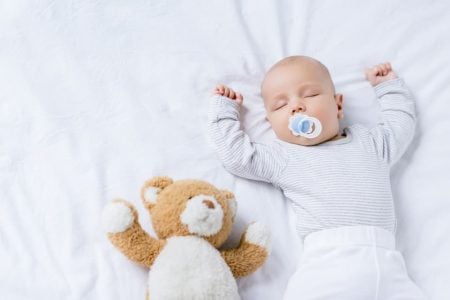 Baby Bottle Tooth Decay: How to Prevent It